See America, travel by train. Riding Amtrak from north to south, from New York to Lynchburg, is a little boring after you have done it a few times. It's true I enjoy the train much better than the super-hassle of air travel. I am not sure I have not had a delayed flight in the last 20 years. Not to mention incredibly uncomfortable seats, baggage boondoggles, and missed connections. Train travel, if available, is my choice. This trip made me think a little more as I zipped by landscape that was not your typical post card America. Although I have made this trip several times, this time it bothered me more. 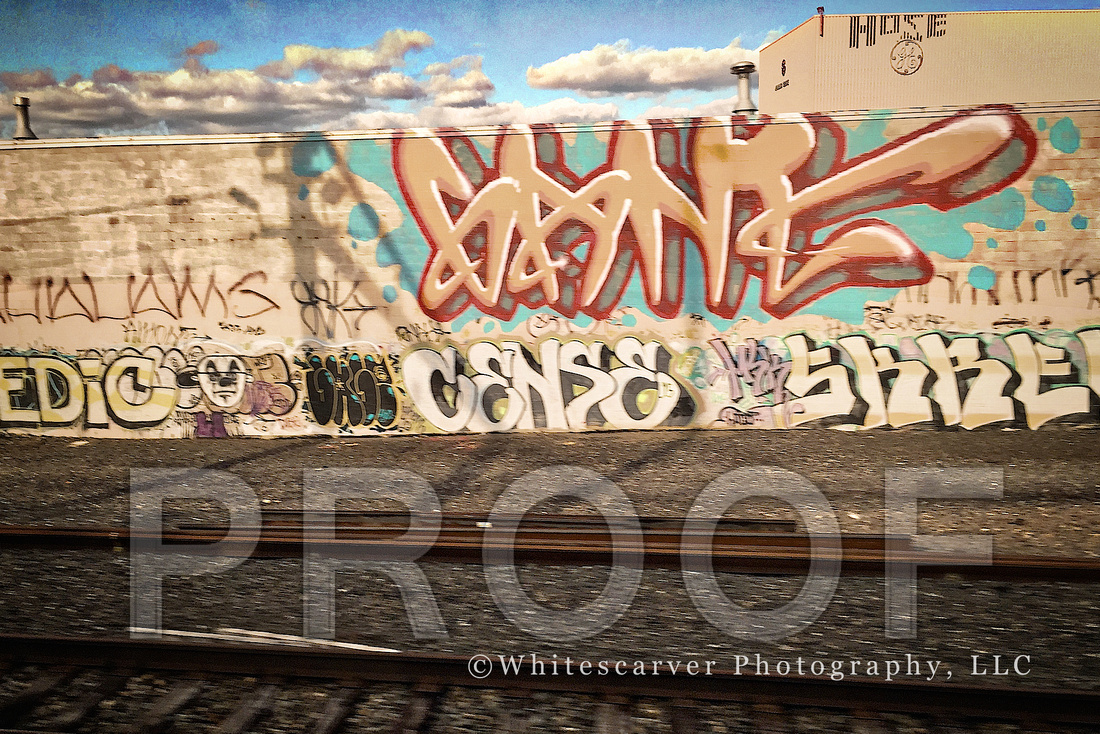 As the train reaches cruising speed you can settle into a hypnotic clickety-clack. Or, you can stare out the window at some of the most distressed areas in the country. I suppose at one time living and working near the train tracks was the choice for commerce and travel. But as roads and air travel improved, people and businesses moved further and further away from the tracks. And as this photograph shows the edge of the tracks provides endless canvasses for art in many places. I have wondered how they make those bulbous letters and have always wondered what they mean. Is it code? Is it a language I never learned in school? And when did they do that? 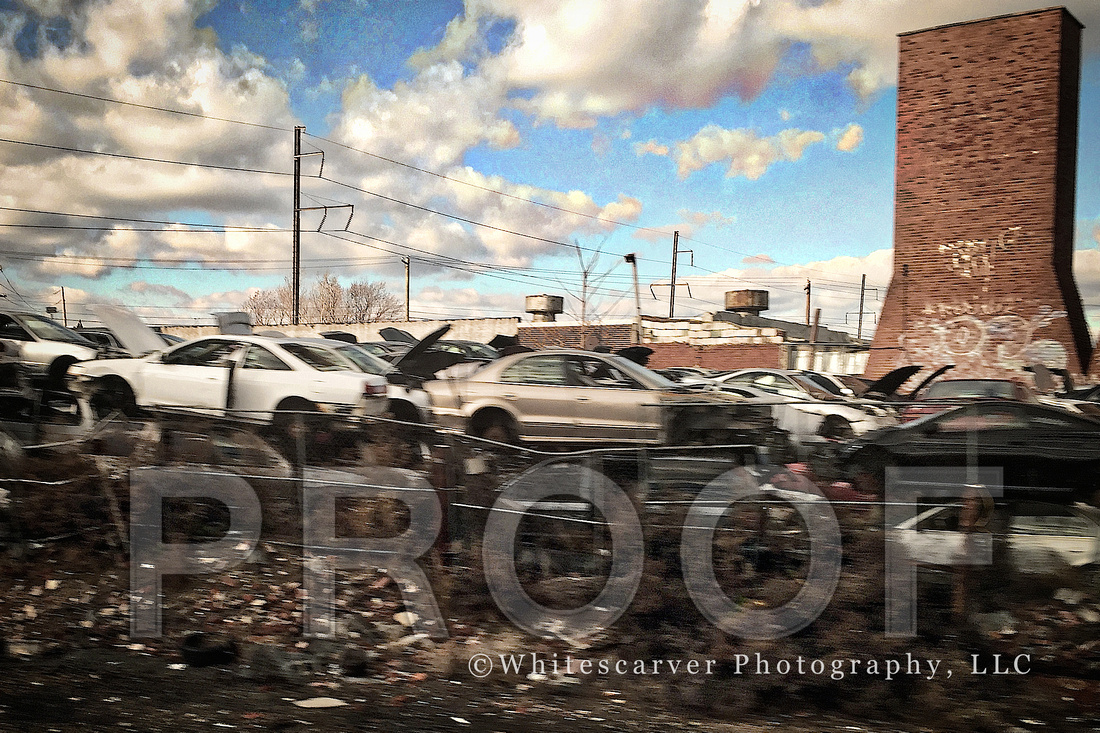 If you have an old car leave it down by the tracks. Nobody will mind. This might be somebody's business, or not. The brick chimney tells me a building once stood here. A lot of buildings used to hug the tracks.

Just for a minute let me explain the photographs. They were taken with a Canon G1X MKII. My travel camera of choice. All photographs were taken from inside the train, late in the day, while the train was moving. Blur is evident, but that's what you get; and that's what I wanted to some extent. Once I looked at the photographs as a group I thought I had photographed a devastated city after an apocalyptic event (maybe I did). 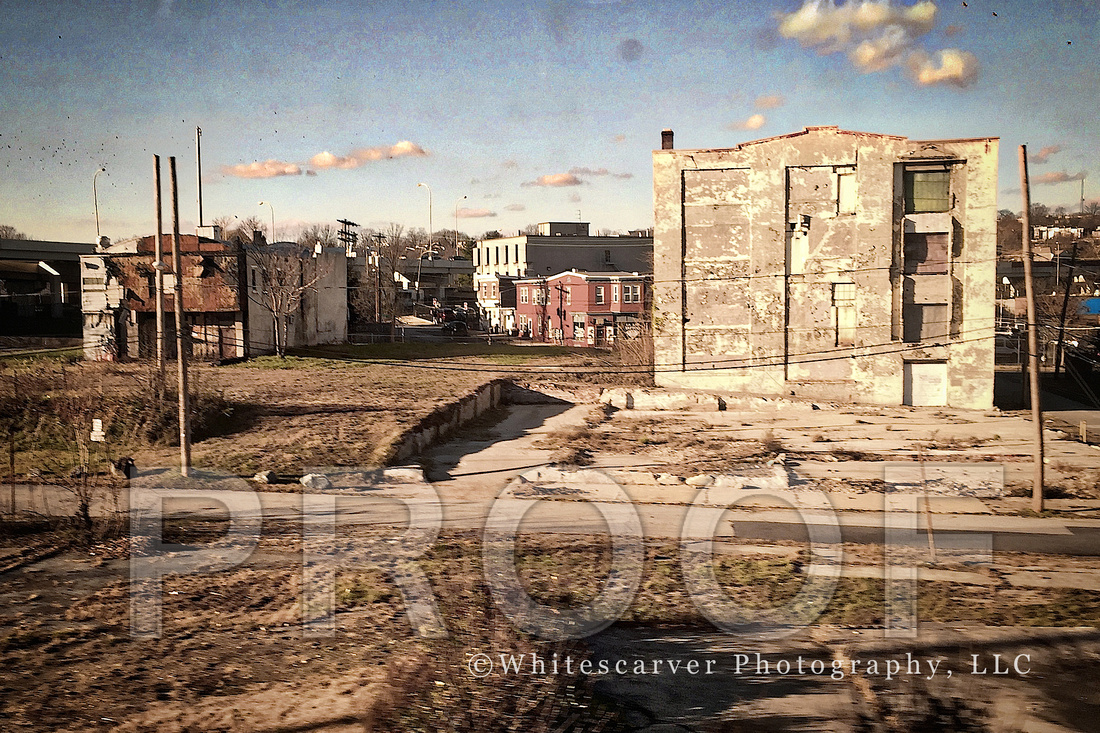 My travel companions and I wondered what did the people who lived in these areas do for a living. How far do they have to go to work? How many of them would be willing to work a few hours on a day off to clean up the areas by the tracks? Have they been treated unfairly by employers, laid off as businesses moved away, are they happy? 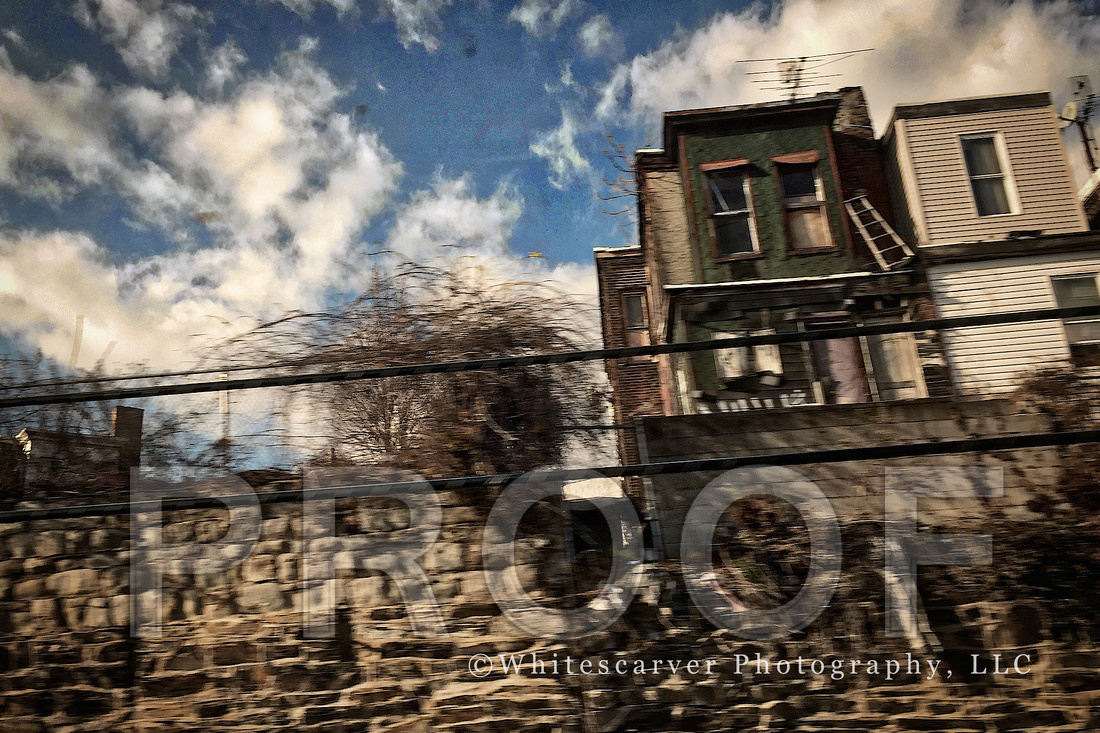 The ladder in this photograph intrigues me. Would you climb it? When that building was constructed the norm was big tall windows. You don't see that too much anymore. Do you think that roof leaks? 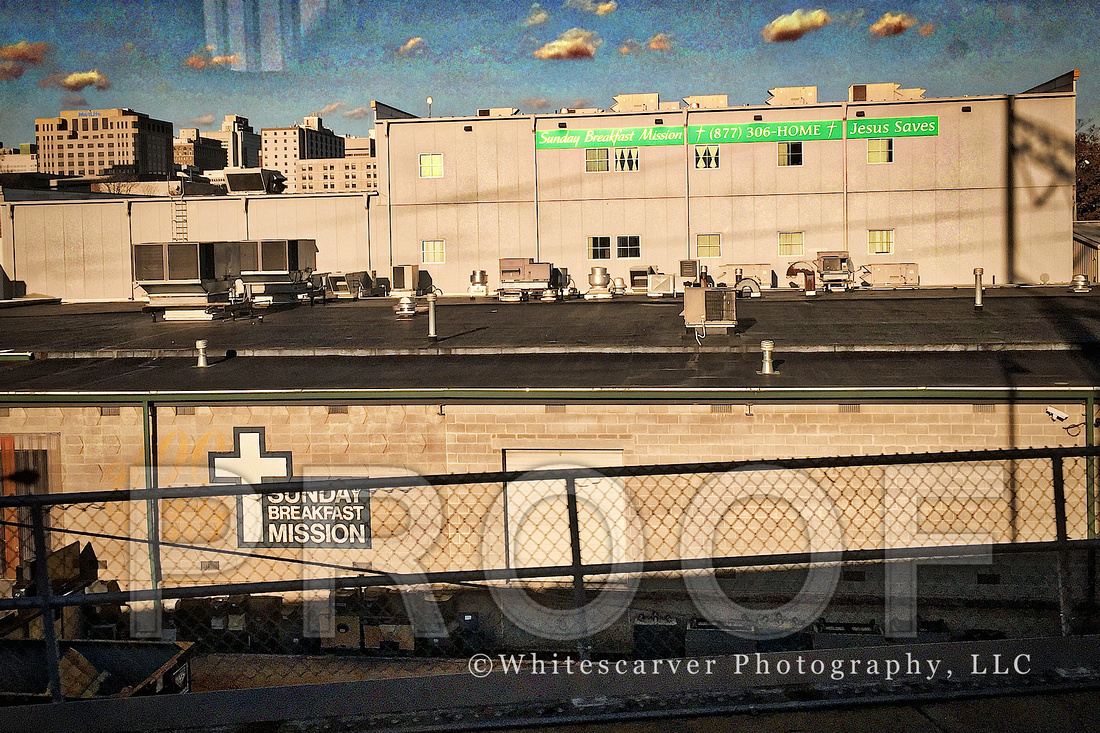 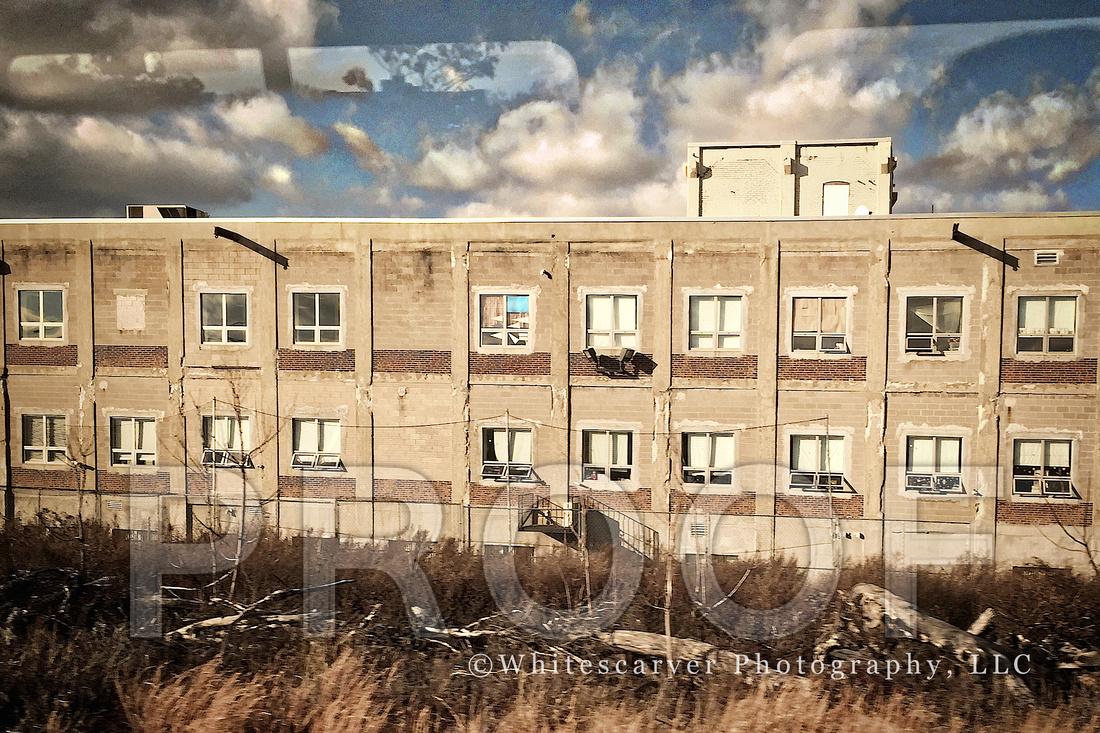 When you get close to a big city (DC) the starkness does not really change. If you drive by car into a big city you have traffic. The photographs below don't portray much hustle and bustle as you arrive by train. This was a weekday. 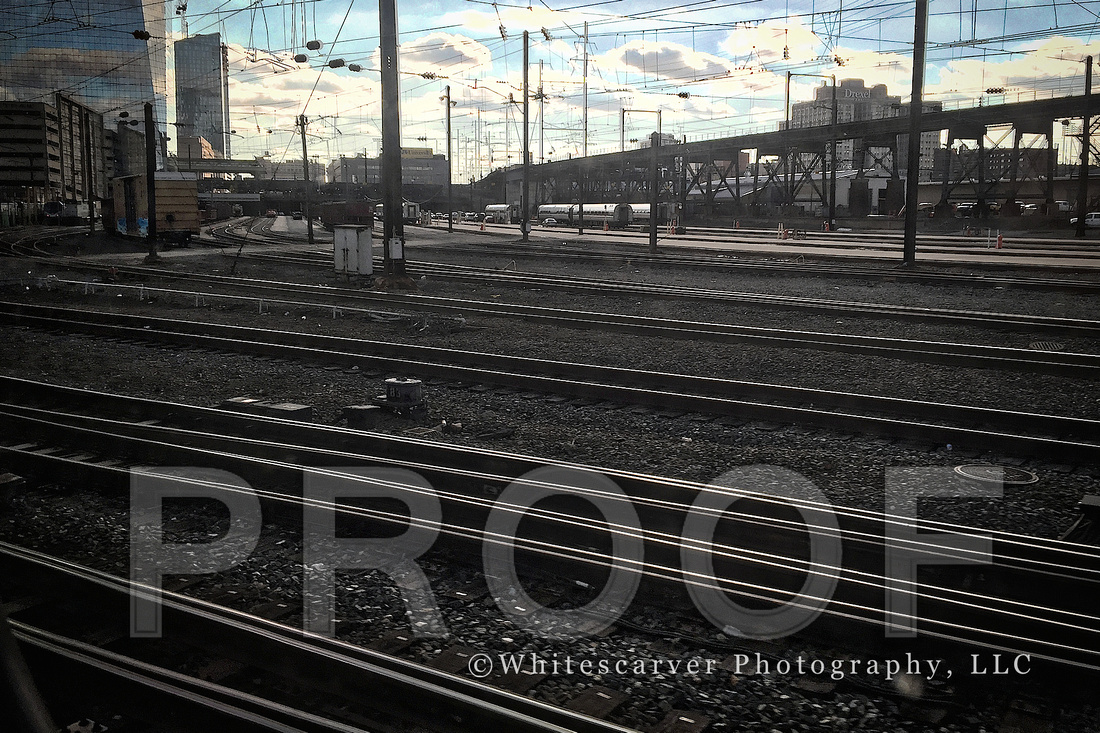 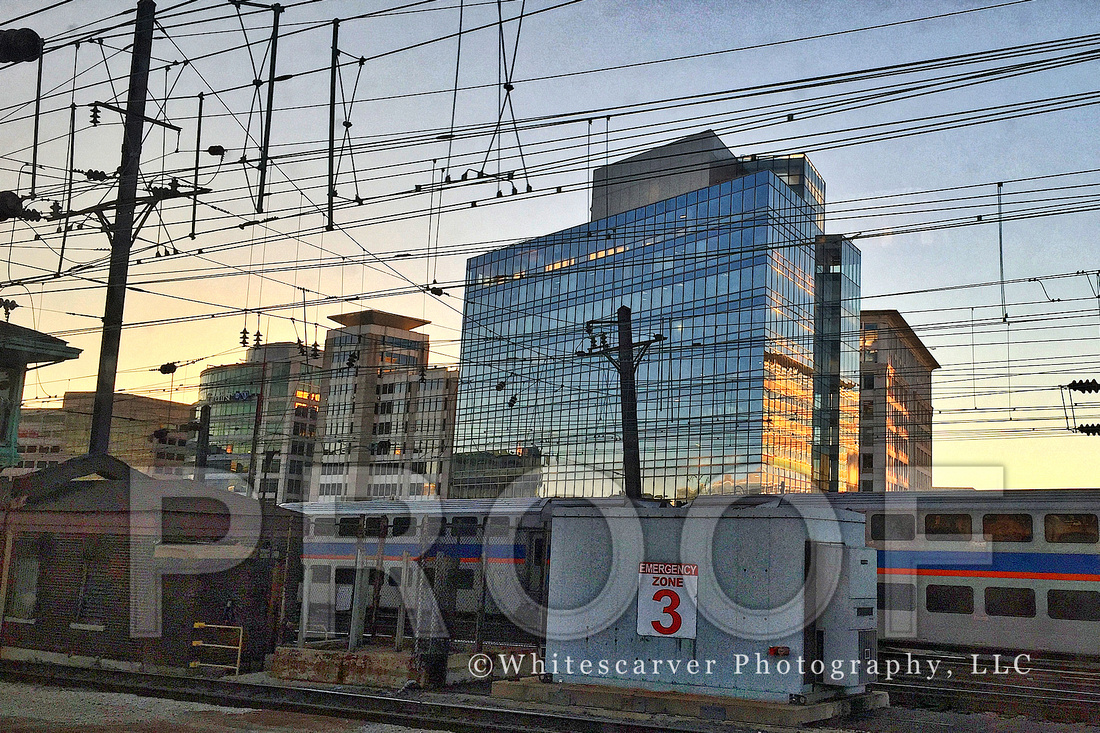 While gazing at the system of cables and wires that power our train I was thinking how amazed I was when the Brits and the French built the Chunnel to connect them. That train is fast, at least it looked fast when Tom Cruise landed on it while being chased by a helicopter (the movie, remember?). Do you think if the U.S. focused more on trains and less on automobiles we would be better off? 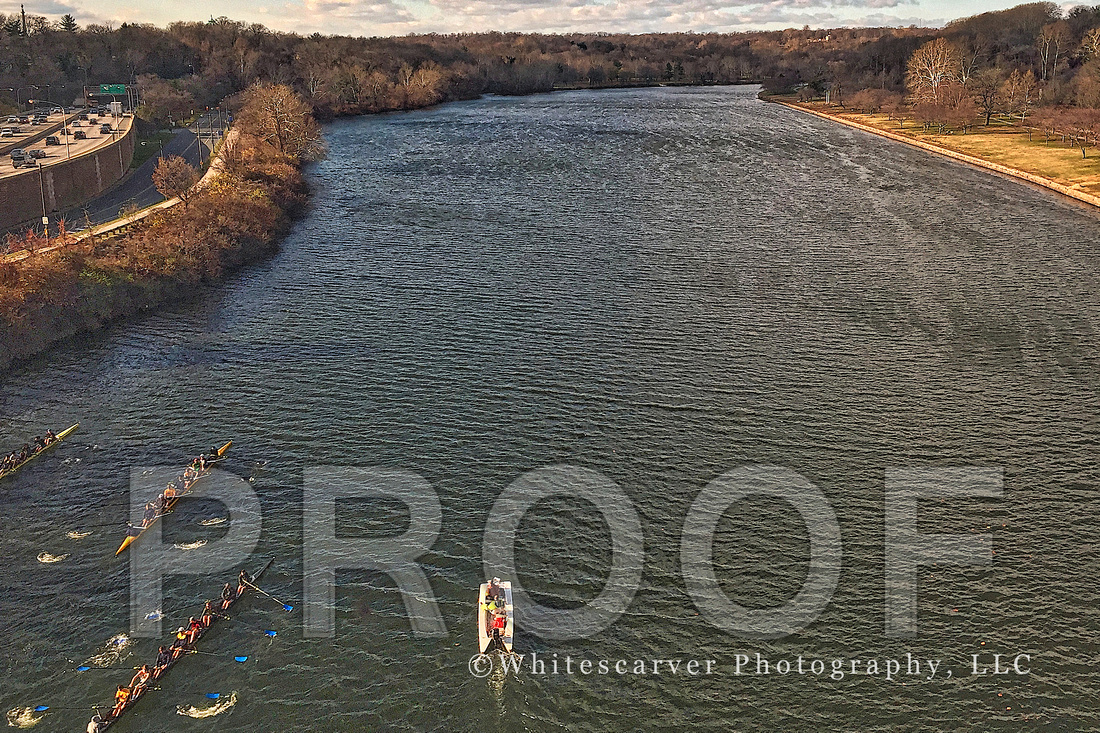 I must confess when the train crossed the river I just wanted to catch the water. I did not realize until later I had captured rowing crews in training. Of all the photos in this collection this is one of two that has people in it. There is irony that in all the buildings I photographed, no people. But when I crossed a river... 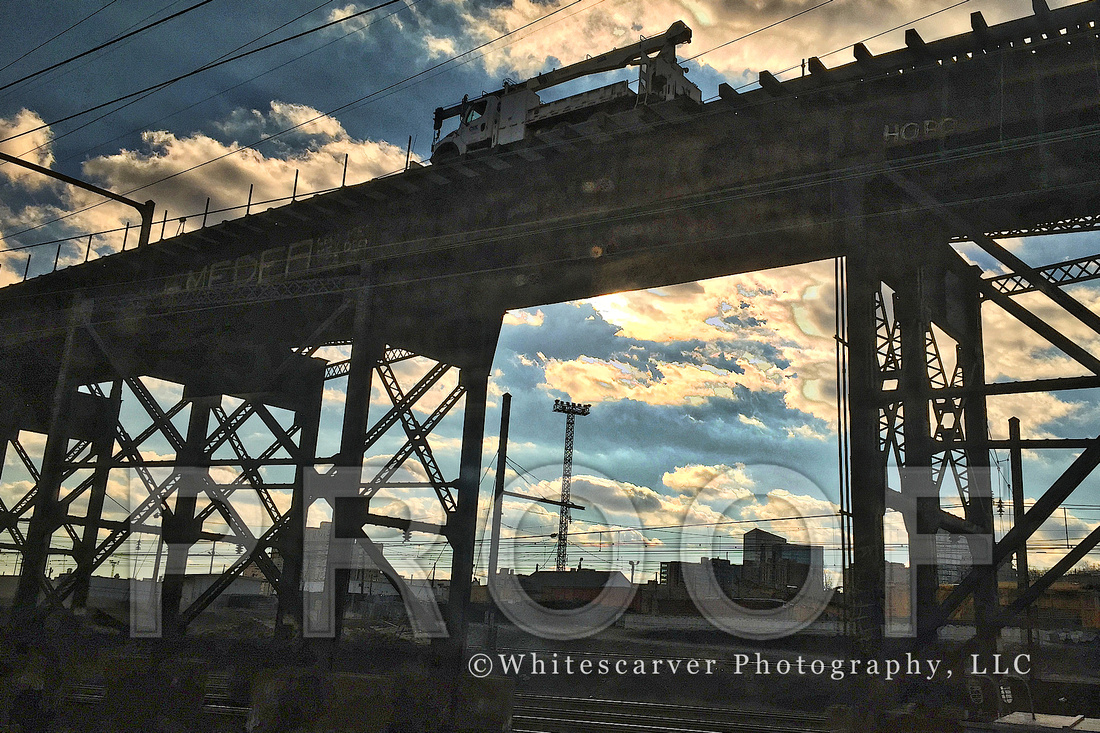 The sun was now becoming a challenge. I have to hide it behind structures. It's getting close to the best time of day to take photographs but I am sitting on the wrong side of the train. 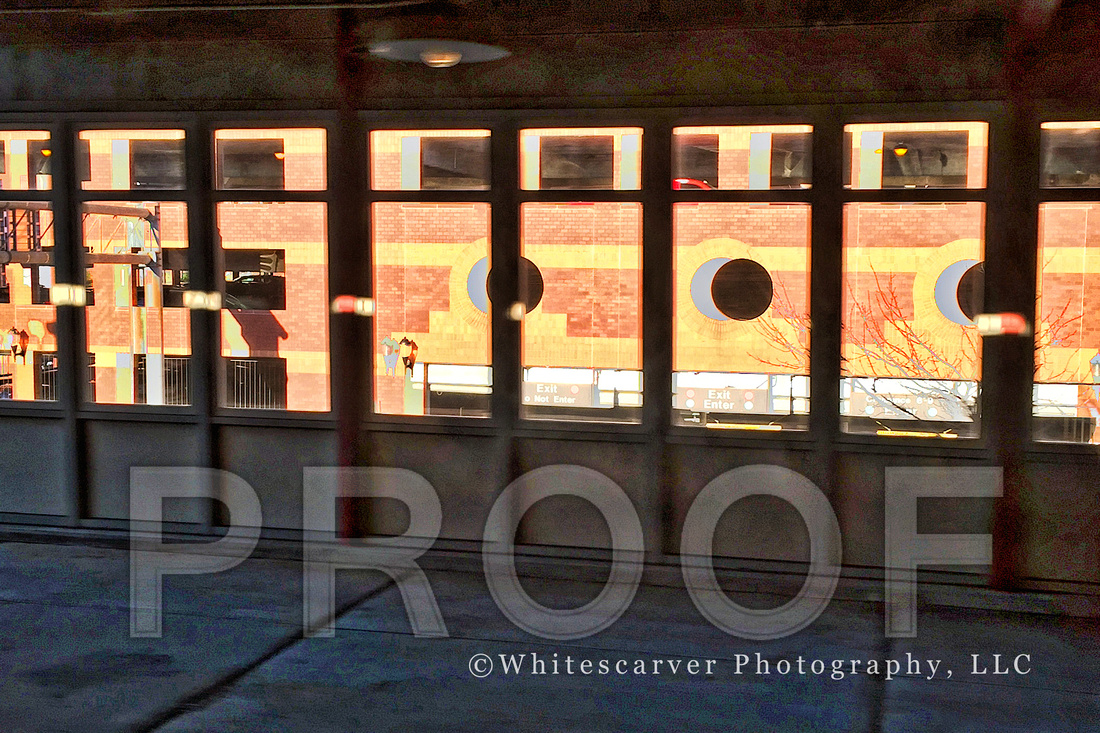 When the train stopped to disembark and board passengers it is surprising how empty some of the stops are. At Penn Station in NYC the ebb and flow of riders is sometimes an inescapable vortex of humanity whose sole purpose is to keep you from your gate. In southwest Virginia the only people who rush like that are transplants from the north. However, sometimes the buffet at Shoney's can get like that when the fresh pan of bacon arrives. 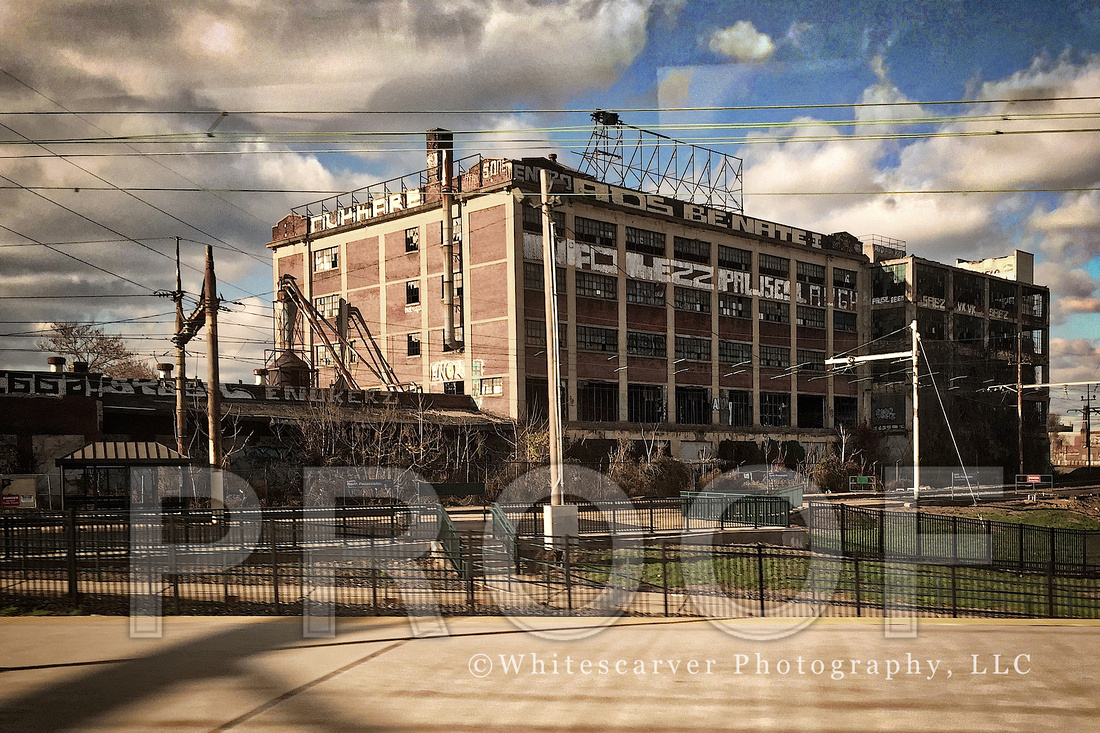 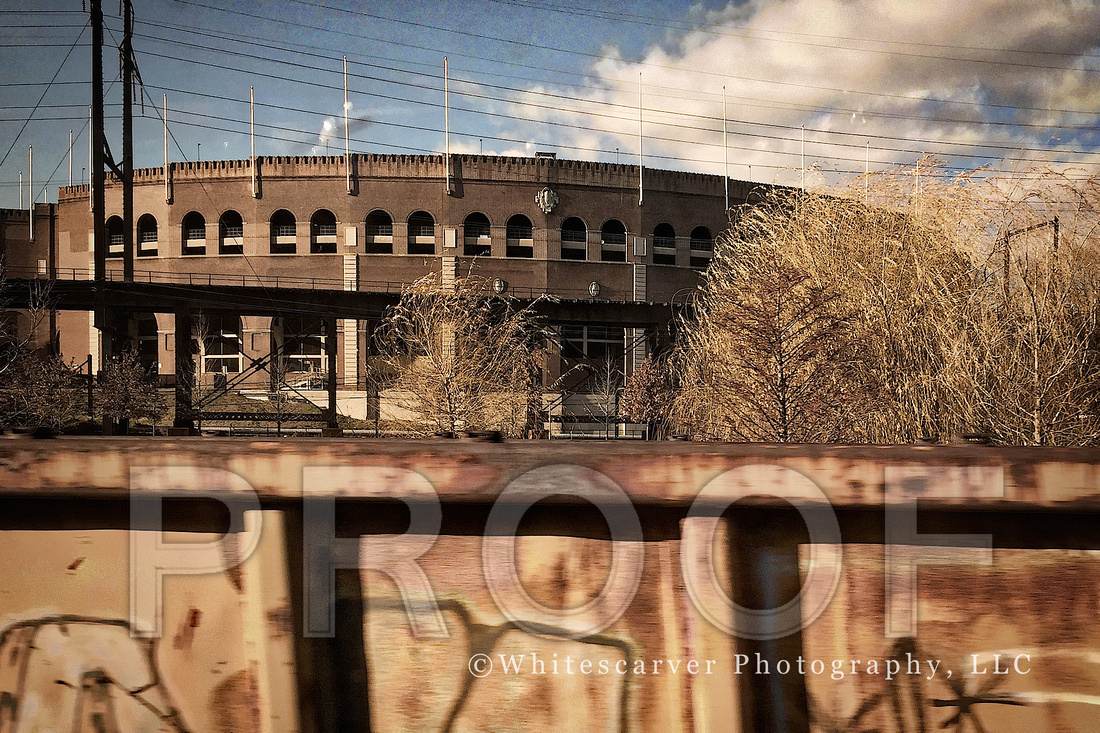 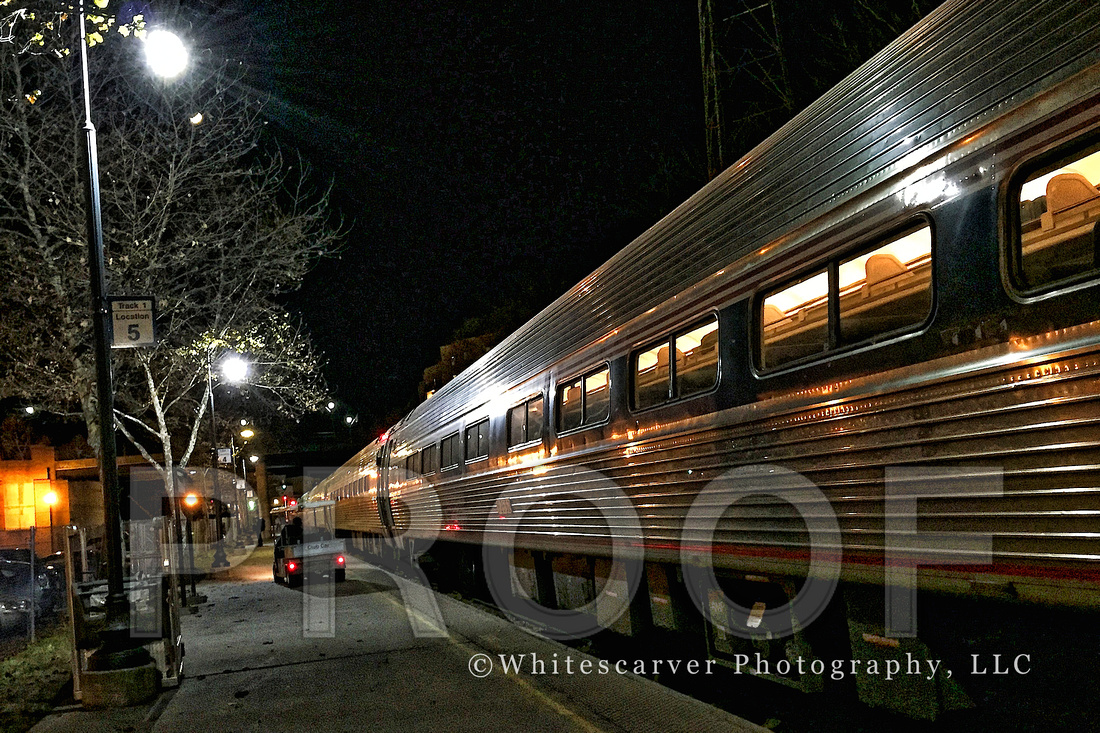 Darkness, and almost the end of the line. Only one more stop until I disembark. The train is almost empty. I get off at the last stop, Lynchburg. Virginia, not Tennessee, big difference. Considering pretty comfortable seats, wide aisles, a dining car with reasonable prices, low fares, wi-fi (a little spotty), easy cell phone use, a quiet car if you so desire, and views of America by the tracks, train travel beats air travel every day for me.

But I am disturbed by the amount of urban decay you can see. People seem to think it's OK to dump trash by the tracks. Property owners seem to have no interest in re-purposing buildings. Perhaps the problem is toxic waste and no money to clean up before another use. Railroad ties are toxic. Many of the industries that lined the tracks had something toxic in their product or waste. We show people our National Parks and Monuments with pride. We build massive arenas for sports that are used only a few months a year. Municipalities spend tens of thousands of dollars on consultants to learn how to "re-vitalize" their cities and neighborhoods. Take the train, perhaps you will see some answers.

Kelly Graham(non-registered)
Terrific essay Charlie! I am taking the train for the first time this weekend -- we are taking our grandson to DC for his 9th birthday. Your insights are appreciated and will keep my anxiety level down.
Laura Minnick(non-registered)
I love and also prefer taking the train and share your sentiments, Charlie. Have often marveled how cities such as Chicago built neighborhoods/ communities beside the tracks. This foresight and planning made such good sense to me. Train travel in Europe is the best. I sure wish more money was spent in our country developing the infrastructure for high speed rail. I am sharing your post as this was a fun and thought provoking piece.
No comments posted.
Loading...
Subscribe
RSS
Recent Posts
If you can't touch it Business Cards, Obsolete? America by Train Constitution Day, Newcastle, Virginia, 2014 Football Photo Day at CHS Downstream, drink it up if you dare Support your local newspaper Matt Hagan Outdoors store opens in Fairlawn Tag, You've been Phasered Newcastle Festival
Keywords
Whitescarver Photography Newcastle festival open carry Christiansburg cloud disks photo photographs
Archive
January February March April May June July August September October November December
© Whitescarver Photography, LLC
Powered by ZENFOLIO User Agreement
Cancel
Continue